I bought these breeches last autumn in a charity shop called UFF in Helsinki with the idea of selling them to some gentleman, but I tried them on at home and they were a perfect fit so I couldn't help keeping them for myself! One of the biggest problems with breeches though is that you need a pair of pretty high boots to wear with them, and let's just say high boots aren't the easiest thing to find when you are 180cm tall :-)
Luckily enough Lassi found the perfect solution for it, which was using puttees. Puttees are long strips of fabric that can be rolled around the legs, and they're the perfect substitute for high boots! (plus I think they look great) Lassi also managed to find these being sold in Varusteleka, which is a wonderful shop in Helsinki that sells army clothes and equipment, and usually has extremely good quality items for a very economic price (plus a lot of the army clothing is still made with the same shape/cut as it was 80 years ago!) 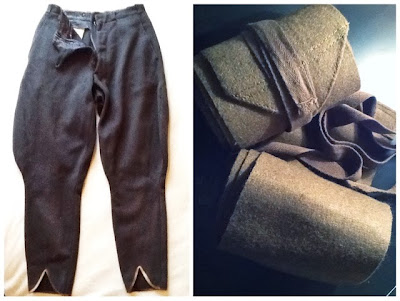 Breeches sadly aren't used very often anymore, so it is sometimes difficult to figure out how to make the whole outfit work. I have lately also been extremely inspired by women that used men's clothing, from the end of the nineteenth century up to the begining of WWII. For this particular outfit, I decided to use flappers and tomboy's of the 1920's as inspiration.

As I explained in the begining I put this outfit together in a bit of a rush and only as a test, but I'm quite pleased with the outcome! None of the items I'm wearing is from the 20's, but I think the overall look works. I'm wearing:
- breeches from the Finnish army, "new" (not sure how new, but they can be considered repros) from a second hand store called UFF
- puttees from Varusteleka
- 1910's skating boots, from ebay (absolutely the BEST pair of winter boots I've ever had, and they're drop-dead gorgeous!)
- shirt probably from the 50's, from a theatre fleamarket
- knit, new from a charity shop called Fida
- beret, new from the Red Cross' charity shop
- overcoat from the 50's, a bit too big for me but that makes it look a bit more manly (and the colour works perfectly with the military theme)

Posted by Pepper Sparkles at 19:10